On the southwest corner of Fairmount Avenue and Kennedy Boulevard in Jersey City, a bouquet of limp roses duct-taped to a traffic light pole hangs down beneath a photograph of a smiling young man. A typed inscription reads: “Stephen Clifford, 4.19.13. Miss you buddy.” The same sign of grief answers it on the northeast corner. For five years, Clifford’s family has refreshed the memorials, which are sometimes removed by city workers, sometimes by weather.

On April 19, 2013 at 10 pm, a speeding off-duty Jersey City police officer killed Clifford with his car, which was traveling 65 mph, as Clifford walked across the street after a dinner out. In October 2015, Officer Michael Spolizino was found not guilty of death by auto and leaving the scene. Clifford’s death galvanized Jersey City safety advocates. His neighbor, Kara Hrabosky, formalized her efforts to slow speeds on the boulevard by starting Safe Streets Jersey City. At the same time, Bike JC, the nonprofit bicycling advocacy group, began work on its Grand Street Vision project, in part in response to the hit-and-run that killed cyclist Natasha Caicedo on Grand Street two months after Clifford was killed. (Disclosure: I was on the board of Bike JC until three years ago.)

Part of the challenge of getting basic street safety measures enacted--such as lowering the speed limit, enhancing pedestrian crossings, and changing the width of major streets--has been lack of money and personnel devoted to the cause by city and county governments, along with a lack of comprehensive data. “The traffic fatality rate in Jersey City has been about 40% of the murder rate, and we don’t get 40% of the resources,” says Hrabosky. In Hudson County, fatalities from vehicle crashes have exceeded murders in 2017 and 2012. 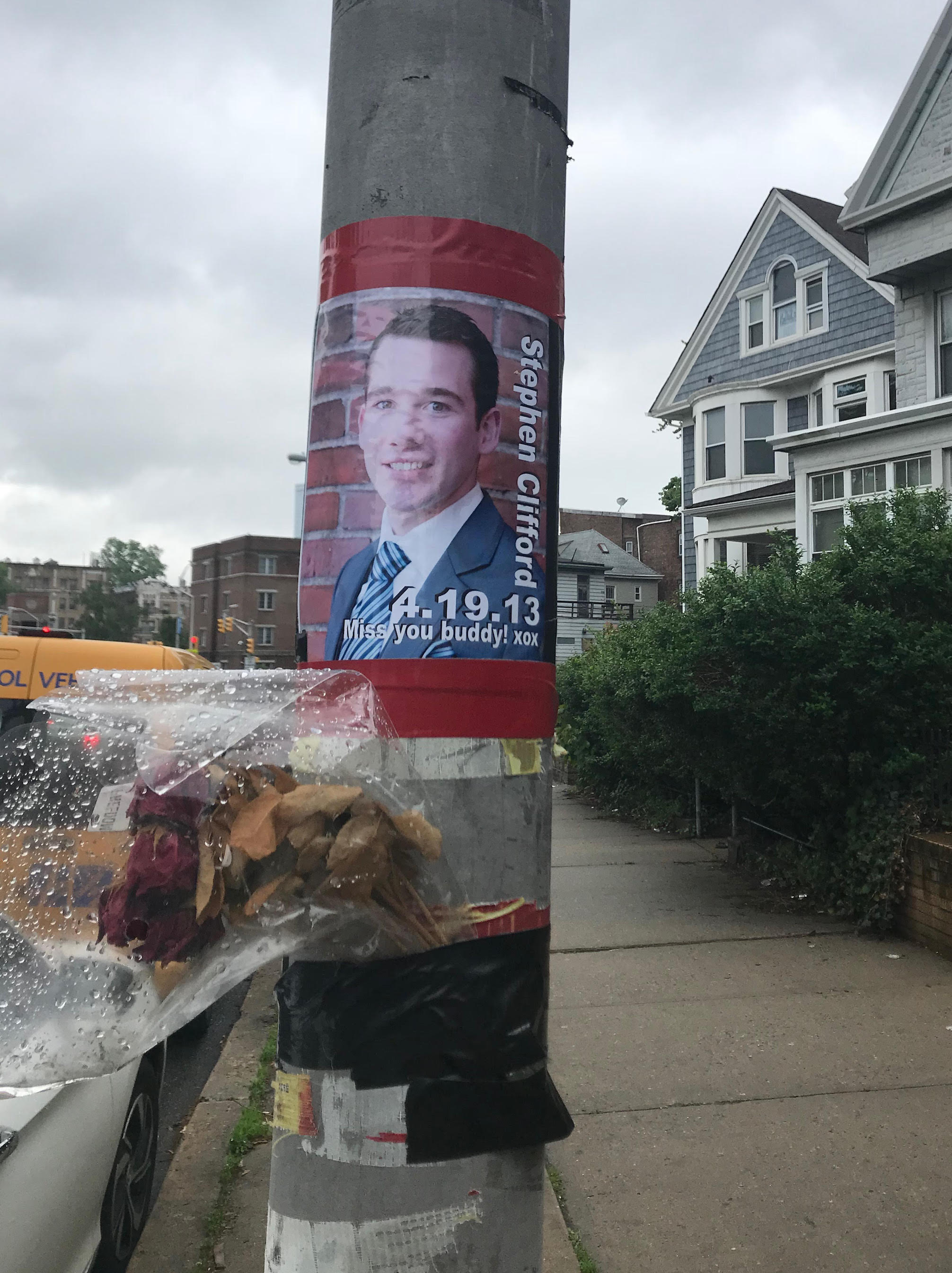 Since Clifford’s death, 11-year-old George Gonzalez was killed in 2016 on Kennedy Boulevard, by a minibus that struck him as he tried to cross the street to his school bus; 8-year-old Jerry Grant was killed crossing the street at Grove and Columbus last year; and Umar King, 33 and deaf, was killed by a speeding car driven by a suspect fleeing a chasing police car chase earlier this year on Kennedy, one of the more dangerous roads for pedestrians and cyclists.

The car and the human collide over and over in Jersey City and Hudson County, and traditionally, the car and driver have borne less culpability for their actions than those who kill by other means, with collisions between the car and other humans being called “accidents.” Even as public safety accounts for a third of the city’s budget, little to date has been invested in preventing deaths by automobile. 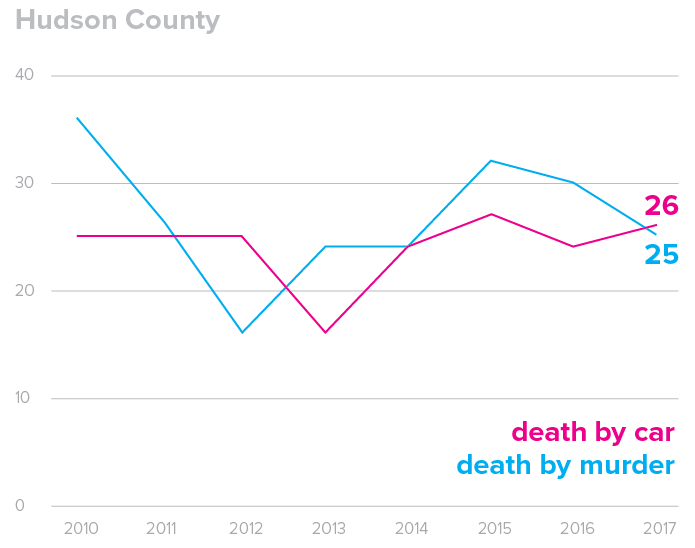 That may be finally changing. In February, Mayor Steven Fulop signed an executive order making Jersey City one of nearly three dozen US cities signing on to the Vision Zero initiative, which aims to prevent all traffic deaths through better planning, engineering, enforcement, and education. “The whole idea of vision zero is not one death is acceptable,” says Patrick Conlon, president of Bike JC. “The cost of our transportation system isn’t that people die.” After the initiative launched in Sweden in 1997, San Francisco and New York adopted vision zero policies in 2014, with cities such as Los Angeles, DC, Austin, Philadelphia, and Orlando following suit.

Unlike traditional policing, which often responds to crime after it happens, Vision Zero treats traffic fatalities like a preventable disease, looking at the planning and habits that make it easier for cars and trucks to kill and injure people. Vision Zero practices include narrowing roadways and intersections, as well as lowering speed limits and adding protected bike lanes. “A lot of it is controlling speed,” says Conlon, who recalls a police officer on the Vision Zero task force saying that he was so troubled by Gonzalez’ death that he personally monitored that part of Kennedy Blvd for six months afterwards. The executive order requires a year of study and data collection, including crash numbers from hospitals, as well as police reports, and from particularly unsafe corridors, so that planners and engineers can focus changes where most needed.

Cars and trucks seem particularly reckless here--they speed, turn without stopping, run red lights--in large part because of current street design. Many local roads (Kennedy, Grand, Columbus, Montgomery) are four lanes in parts, where drivers flout the speed limit; the only protected bike lane in the city abuts the new Berry Lane Park. “We find that in other Vision Zero cities they have also found this small number of streets that have been responsible for a large number of crashes,” says Bakha Patel, senior transportation planner for Jersey City. Patel says that changes are underway, even during the year of study, among them curb extensions and signal timing at intersections.

Counting these as Vision Zero commitments puts Jersey City among the top tier of cities spending money to make streets walkable and bikeable, at a ratio of approximately $36 per resident per year. Both Los Angeles and Washington DC saw pedestrian and cyclist deaths rise since adopting Vizion Zero. But both of those cities committed less than $1 per resident overall in past years, according to the State of Place blog, where the self-professed data geeks write, “for such lofty and important goals as these cities have laid out, many of them do not seem to have the proper funding and/or capacity to see them through.” 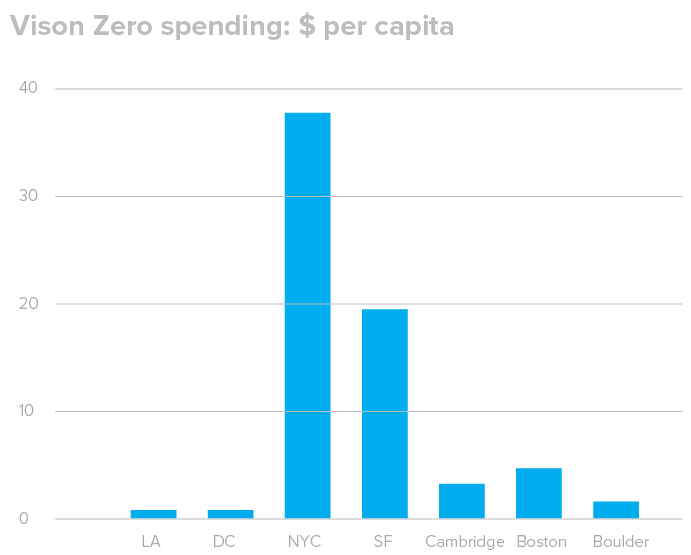 In contrast, New York City has pledged $1.6 billion over 5 years, or $38 per resident per year. New York has seen dramatic decreases in traffic deaths. In 2017, there were 214 total crash deaths in the city, with 101 of those pedestrians, the lowest number ever recorded in the city. Fatality rate is just one measure of bike/ped street safety, and it may be the roughest. Another way to track street safety is the killed or seriously injured (KSI) rate, which is more constant, as many more cyclists and pedestrians are injured each year than outright killed. For now, Jersey City provides police data on crash reports and fatalities but not the KSI rate.While differences in reporting budgets and grants make it difficult to calculate precisely total per-resident price tags for Vision Zero, The Local’s analysis of seven cities shows that those cities spending above $3-4 per resident saw decreases in traffic deaths, while those spending below that had increases.

As with any public health initiative, Vision Zero can change habits to some degree, but other structural factors push back against all the curb extensions and light changes. Hudson County is the sixth densest in the nation, after four New York City boroughs and San Francisco. People frequently bump up against each other here. Jersey City’s streets are designed to move cars through them, despite the high rate of car-free households. In Jersey City, 37% of households are car-free, less than New York but more than all other US cities except DC and Newark, which also hover around 37-40% car-free.

The main challenge for making streets safer is "the street design, where we have devoted two-thirds of every residential street to car storage," says Ollie Oliver, a Heights resident and cyclist. As just one measure of how American streetscapes defer to the automobile, Oliver notes that "we have devoted storage for car owners far out of proportion to their representation in the population.” Oliver was hit by a car on Baldwin at Route 139 last year and endured months of rehab before he could ride again.

Nationally, both deadly car crashes and hit-and-run’s are up, with AAA attributing the rise to smartphone distraction. Pedestrian and cyclist deaths overall have also gone up, from lows in the late-00s. Light trucks--i.e. SUVs, pickups, and vans--kill cyclists and pedestrians more than any other kind of vehicle, and Americans are more infatuated than ever with light trucks as passenger vehicles.

In New York last year cyclist deaths were up, even as the city increased protected lanes, in part because of increased numbers of cyclists. And advocates in New York City worry that the state’s failure to renew red light cameras around school crossings will result in children’s deaths this school year. Yet despite all this, Vision Zero policies do seem to be saving lives in the cities that have committed money to it over several years.

Redesigning streets for pedestrians, even more than citizen education and police enforcement, can be a tool for equity as well. In a critique of purported fixes by New Jersey’s Department of Transportation to Newark’s Route 21, the blog Black Kids in Outer Space, devoted to planning policy and its impact on African Americans, wrote and Tweeted, “How many Black people did bad infrastructure kill today? Before educating Black people on crossing the street, start with proactive street design.”

At the intersection where Clifford died, the walk sign flashes on for several seconds before the light changes so traffic can go across Kennedy Blvd. Before cars can turn left or right, schoolchildren in the morning wave good-bye to their parents and cross the street on their own.

Community members can attend a meeting about the Montgomery Street corridor at City Hall, 280 Grove Street, Tuesday, July 31, at 6:30 to give input and follow developments at visionzerojc.com or https://www.cityofjerseycity.com/community/transportation/trafficsafety/.

Open City: Does sharing have a cost?

Are Jersey City schools integrating on their own?